[Update 2011-06-01: apparently Verified by Visa is not responsible for this flaw, but my bank, Wells Fargo, as a user of Verified by Visa, is the culprit for enforcing weak passwords.] 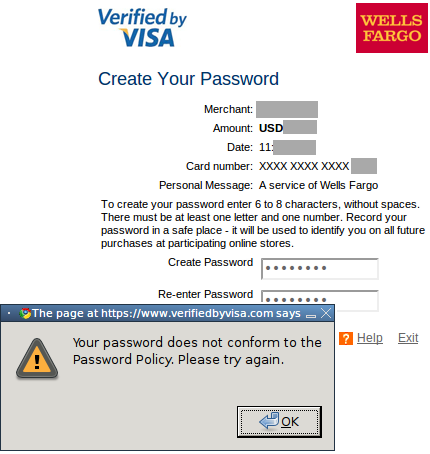 Visa's password hashes (assuming they hash them, and with something more secure than NTLM!) are not available to attackers, but they have zero reason to enforce such a small password space:

Why does one of the world's first financial services company get security wrong? The most ironic is that a few months ago, they made the exact opposite mistake: Visa was enforcing password requirements that were overly complex. The right solution is obviously the middle ground: require passwords of at least 7 characters in length to comply with PCI DSS, and allow users to chose very complex passwords if they want to. If I want to type a fully random 128-character password, you should let me do so.