I was initially very dubious when hearing about E-Cat, a cold fusion reactor supposedly invented by Andrea Rossi. The first 1 megawatt unit was reportedly sold to a secret customer two days ago. Mainstream press has mostly ignored the invention so far. However, I found out there is a surprisingly rich history of scientific research and experiments about the mechanism it employs, nickel–hydrogen fusion. Evidence proving that the device is working keeps piling up and up. This is to a point that I am now personally convinced that this is one of the greatest (accidental) discoveries in human history.

The Italian National Agency for New Technologies, Energy and Sustainable Economic Development (ENEA) published in 2008 a long report entitled Cold fusion - The history of research in Italy which is very broad in scope and contains a section giving a good summary of the research sparked by Francesco Piantelli's initial discovery:

"The research in the field of nickel–hydrogen systems started from an experimental observation by F. Piantelli at the end of 1989 concerning a strange thermal effect at low temperature in a sample of nickel with hydrogen. Piantelli spoke of this effect to his friends S. Focardi and R. Habel during the SIF congress in Trento (October 1990)."

However, due to chronic lack of funding, research progressed very slowly over the following years. Eventually, experiments were performed thanks to loans and direct participation from many colleagues and friends from the University of Siena and Bologna, from INFN, ENEA, CNR of Pisa, CISE, the Navy Academy and the Municipality of Bologna. Focardi et al. first formally published their results, in 1994, in the peer-reviewed article Anomalous Heat Production in Ni-H Systems, in which they detail a system with a cell that appears to produce power of up to 50 Watts, while absorbing hydrogen as evidenced by a pressure decrease. They cautiously do not attempt to explain these strange results, but invite the scientific community to look at the results while merely concluding:

"Up to now we are not able to formulate any consistent model which comprehends the phenomenon."

Their discovery receives some attention and, in 1996, prompts a team from the CERN to reproduce the experiment: Investigation of anomalous heat production in Ni-H systems. The CERN discovers results consistent with Focardi et al.: excess heat around the nickel bar and hydrogen absorption. However they also placed an additional temperature sensor on the container of the cell which was unable to measure any significant excess heat. They theorize that the nickel bar is merely prone to local variations of its thermal characteristics (ie. no excess heat), correlated to the phenomenon of hydrogen absorption. They concede that hydrogen absorption remains unexplained.

Focardi et al. took this feedback into account, and started measuring the temperature from outside the cell's container while continuing their research. In 1998 they publish a subsequent article, Large excess heat production in Ni-H system, describing in great details two cells with multiple sensors, some outside the container. They show that the excess heat is indeed more subtle when measured outside the container (see Fig. 6), but it is still present:

"The existence of an exothermic effect, whose heat yield is well above that of any known chemical reaction, has been unambiguously confirmed by evaluating the thermal flux coming from the cells."

One of the cells ran continuously for 278 days and produced an excess power of about 900 megajoule, while another ran for 319 days and produced 600 megajoule. In Cold fusion - The history of research in Italy, the researchers add that they observed events of nuclear origins:

"During the experiments, which altogether lasted for about 15 years, many phenomena witnessing nuclear reactions inside Ni samples in H atmosphere were observed. While it was producing energy, the cell which produced 900 MJ emitted neutrons for some days [...] equal to 1000 times the neutron flux due to cosmic radiation. [...] Other events, whose existence can only be due to nuclear reactions, were observed at the end of the experiments [...] We observed in remarkable quantity Cu and Zn (with atomic number greater than Ni), F, Na, Mg, Al, Si, P, S, Cl, K, Ca, Mn, Cr, Fe (Fig. 3)."

(One nickel atom fusing with a pair of one hydrogen atom and one neutron would produce one copper atom (Cu), or zinc (Zn) if fused with two pairs. This would indeed indicate that fusion is taking place.)

Unfortunately, the 2008 report Cold fusion - The history of research in Italy abruptly ends with these promising research results, and Focardi et al. appear to have stopped conducting further public research since this time. Instead, around 2008, Andrea Rossi reportedly came to Focardi with a way to catalyze (accerelate) the reaction to a point that it made it commercially viable. So he started working with Focardi with the intention of commercializing an energy reactor based on nickel–hydrogen fusion.

Rossi has a tumultuous history to say the least. More of an entrepreneur than a physicist, he was offered a permanent entry visa to the US to develop some of his unrelated ideas. Later, he spent time in prison in Italy because his company was found guilty of environmental crimes and tax fraud. He has since then returned to the US.

So there we are today, the odd couple of Focardi the physicist and Rossi the entrepreneur are collaborating on the E-Cat, but the press unfortunately focuses too much on Rossi's tumultuous past or lack of credentials, when Focardi spent 20+ years studying the phenomenon.

It does not help that Focardi and Rossi are extremely bad at making themselves look credible. (Although this is changing slowly.) The E-Cat website is very amateur-looking, with typos on the home page ("E-Cat is a devise [sic]..."), poorly produced and unstructured videos presenting the device, and biographies written to inflate their egos ("scientists from all the world agreed that the invention of the energy catalyzer was the best invention to this date in regards to solving the energy problems of our world", from here.) On top of that, the community demands more scientific evidence, but they have mostly ignored Focardi et al.'s 1998 paper published in Il Nuovo Cimento, as well as this one from 2010 sharing a bit more. And Rossi and Focardi now refrain from divulging too many details, to preserve their commercial advantage.

The only details that are being shared is that they enrich nickel with two useful isotopes, nickel-62 and nickel-64, reduce it to micrometer grains, process it to increase the number of surface tubercles (this increases the surface area of nickel and improve its reaction with hydrogen), and add a secret ingredient to break apart the molecular hydrogen (H2) into atomic hydrogen (H1).

Like many scientific discoveries, the exact mechanism by which this nickel–hydrogen fusion occurs is not fully understood. Christos Stremmenos, former Greek ambassador to Italy and former physics professor at the Università di Bologna, researched nickel–hydrogen fusion before meeting Andrea Rossi, and offers a probable explanation of the theory behind it. Yeong E. Kim from Purdue University also published a paper suggesting that Bose-Einstein theory may be explain the E-Cat device.

Stremmenos became involved with Rossi and Focardi, and helped set up a company in Greece to manufacture the E-Cat on their behalf: Defkalion Green Technologies. Greece is a strategic choice as it is a (small) producer of nickel.

The very latest developments are documented in impressive details on a site maintained by Christopher Calder.

[Update 2011-12-05: an even more exhaustive overview of Nickel-Hydrogen fusion research has been written by NASA Engineer Michael A. Nelson in September 2011: Overview of Low Energy Nuclear Reactions (LENR) as Implemented by Andrea Rossi and Francesca Piantelli.]

Nickel and hydrogen are extremely abundant on Earth. Only an infinitesimal quantity of these materials is necessary to produce significant energy levels. Rossi states that one pound of nickel can unleash as much energy as burning approximately 1590 barrels of oil. Nickel–hydrogen fusion would effectively solve mankind's number one problem by providing clean energy at very low cost. Rossi estimates that today's E-Cat design can achieve $.01/kWh when mass-produced, which is about one tenth the average worldwide domestic cost of $.10/kWh. And the technology can only improve!

It is shocking that nickel–hydrogen fusion was accidentally discovered barely 20 years ago, that a breakthrough occurred 3 years ago, that it is still not well understood or studied, yet that a device exploiting it is readying for commercialization. The joke that "cold fusion has always been a few decades away" will soon be dead...

I am positive that this pair of guys who started in a garage are on their way to an energy revolution. 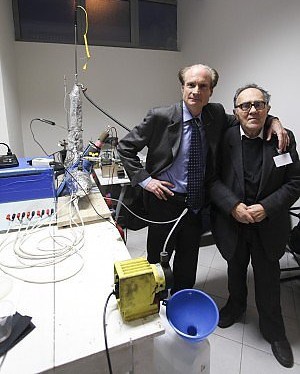 Guess who is Rossi and who is Focardi? You cannot guess wrong, trust your intuition :-)