Today at HPC 2010 China, the GPU-based Tianhe-1A was revealed and introduced as the new world's fastest supercomputer. Many news sites fail to give complete specifications but I have dug up all the information for you, readers. Read on. 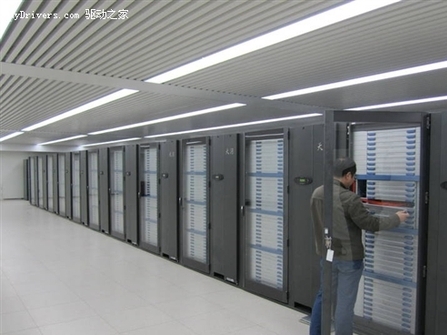 The supercomputer is described as having 202752 heterogeneous cores (this time including the FT-1000 processors —I will re-iterate my previous complaint that these statistics are inconsistent in how extra hardware is either included or excluded from FLOPS and cores numbers):

Tianhe-1A was designed by the National University of Defense Technology (NUDT), installed at the National SuperComputer Center in Tianjin (NSCC-TJ), consumes 4.04 MW of electricity, and comprises 103 rack cabinets. [Update 2010-11-16: Some sources state 112 racks.]

As its name discloses, Tianhe-1A is actually a major upgrade —I would say a rebuild— of the previous Tianhe-1 supercomputer that was made of 3072 nodes, mixing Xeon E5450 with E5540 CPUs, and using AMD HD 4870 X2 GPUs.

Most impressive is Tianhe-1A's theoretical peak of 4702 TFLOPS. This is 58% higher than the previously highest peak value from the TOP500 list (Nebulae, 2984 TFLOPS). I expect to see a system breaking 10 PFLOPS in the next 2 years. Tianhe-1A further solidifies China's leading position in the domain of GPGPU supercomputing who now operates the 3 fastest GPU-based supercomputers in the world: Tianhe-1A, Nebulae, and Mole-8.5. (Mole-8.5 is a smaller supercomputer with 1920 GPUs who got eclipsed by Tianhe-1A but still manages to surpass 1000 TFLOPS theoretical peak performance). After the TOP500 list is updated in November 2010, Tianhe-1A is expected to be number 1 and Nebulae is expected to be number 3.