Here is an amusing typo I found on my Android phone: when editing a number in the contact list, the text under the 7 key reads "PRQS" instead of "PQRS" on the on-screen keypad. I find it amusing because it is so conspicuous that you would think some engineer at Google would have caught it. But no. Turns out it is present on all Android 1.x, 2.0, and 2.1 phones. Millions of them! 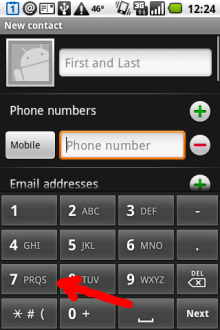 Google may not know their alphabet, but at least it feels good to be able to file a bug on an open bug tracking system over at code.google.com. Could you do that for your BlackBerry, or Windows Mobile phone?