Estimating the case fatality ratio (CFR) of the 2019 novel coronavirus is crucial to inform policy makers and help them make the best decisions.

After the SARS epidemic, a paper was published in the American Journal of Epidemiology by Ghani et al., Methods for Estimating the Case Fatality Ratio for a Novel, Emerging Infectious Disease, where they demonstrated that this common method to estimate the CFR was severely flawed. The authors call it a “naïve estimate:”

They noted this method is “clearly easier to describe to policy makers and the public” however it exhibits “considerable bias.” In the case of SARS in Hong Kong in 2003, between 2 April and 21 May it “falsely suggested a rise in the case fatality ratio” by 5x, from 2% to 11%. See the “naïve CFR” curve labelled “simple estimate 1” in their figure 3a:

In reality the true observed CFR has been about 13% during this period of time. The naïve CFR was severely inaccurate due to “simply an artifact,” a lag: “the final outcome for patients [death or recovery] lagged behind their identification by approximately 3 weeks.”

We observed this false rise in the naïve CFR with other outbreaks. For example Ebola (source: Case fatality rate for Ebola virus disease in west Africa): 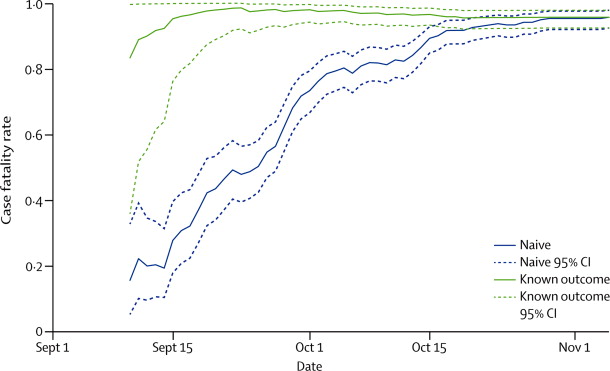 Ghani et al. recommend two other methods to better estimate the CFR. One eliminates the lag between identification and death or recovery by taking into account only cases whose outcome is known, or resolved. Ghani et al. refer to it as the “simple estimate 2” (e₂) but for clarity I suggest calling it the resolved CFR:

Another method is based on the Kaplan-Meier survival procedure, which I will not describe here.

The authors conclude that both methods, the resolved CFR and Kaplan-Meier, “adequately estimated the case fatality ratio during the SARS epidemic.” As their figure 3a shows the resolved CFR tracks the true observed CFR much more closely than the naïve CFR:

Of course these methods have caveats, but it is very clear from their data that the naïve CFR is the least accurate estimate of all methods, severely underestimates the true CFR, and only converges toward it near the end of the outbreak.

15 years after Ghani et al.’s paper, it was cited by at least 59 others. For example Estimating Absolute and Relative Case Fatality Ratios from Infectious Disease Surveillance Data supports it and concludes that “the naïve estimator is virtually always biased, often severely so.”

Since the start of the 2019-nCoV outbreak, another expert has specifically come forward to emphasize the resolved CFR is the right method: see this article in Issues in Science and Technology by medical doctor Maimuna Majumder, PhD.

Epidemiological methods overwhelmingly support the resolved CFR as a better estimate than the naïve CFR, period.

[Edit: 6 months later, in August 2020, the WHO published a scientific brief that explains the issues with the naïve CFR method, and suggests the resolved CFR as a simple solution.]

Unfortunately, 15 years after Ghani et al.’s paper, the public, journalists, and even many in the medical field have learned nothing from epidemiologists. They continue to use the naïve CFR. They appear unaware it often underestimates the true CFR and is expected to rise over time (“false rise”.)

For example the scientific director of the World Health Organization’s SARS investigation (of all people!) appeared unaware. A 2003 New York Times article wrote: “the death rate has also steadily risen, leaving health officials worried. Lacking a precise explanation for the rise, health officials have generated a number of theories. In outbreaks of other new infections, the death rate has usually fallen with time. ‘‘It’s worrying, and we hope it is not an indication of a continuing trend,’’ said Dr. Klaus Stöhr, scientific director of the W.H.O.’s SARS investigation.”

The WHO was subsequently criticized in A comparison study of realtime fatality rates: severe acute respiratory syndrome in Hong Kong, Singapore, Taiwan, Toronto and Beijing, China (PDF version,) where the authors write: “While the outbreak was on going and there were patients still in hospitals over the course of the epidemic, the WHO estimate assumed implicitly that all remaining SARS in-patients would eventually recover. It therefore led to an underestimation of the true case fatality rate. For example, in the midst of the SARS outbreak at April 15th, 2003, the fatality rate in Hong Kong was 4.5% according to the WHO estimate, but it hit a record high of 17.0% at the end of the epidemic.”

Have the WHO learned anything since 2003? No! Another WHO representative recently still used the naïve CFR method which calculates the 2% figure: “WHO representative to the Philippines Dr. Rabindra Abeyasinghe noted that the 2019-nCoV’s death rate fell to about 2 percent.”

To demonstrate how inaccurate the naïve CFR is compared to the resolved CFR, I wrote a Python script that simulates an outbreak infecting a population of 100k individuals over 200 days following a logistic growth curve which increases gradually at first, more rapidly in the middle growth period, and slowly at the end, eventually leveling off. The disease has a 50% probability of causing death 21 days after infection.

The results are obvious: the naïve CFR underestimates the true CFR by 5x (it starts at 9%) and only converges toward the true CFR (50%) near the end of the epidemic. By comparison the resolved CFR is a perfect estimate at any point:

In a second simulation, I changed the parameter time_to_heal to 28 days in order to simulate recovery taking longer than death: deaths still happen 21 days after the infection, but recoveries happen 28 days after. The only difference this creates is that at the beginning and middle of the epidemic the resolved CFR slightly overestimates the true CFR by a factor of about 1.26x (63%/50%):

Want to play with my simulation? Here is the source code:

We know the naïve CFR (2%) is inaccurate and will increase, as per previous outbreaks (SARS, Ebola) and as per simulations.

But we should interpret any CFR estimate with caution:

You can play with the parameters, but either way 2019-nCoV is not looking good at all.

On 10 February 2020, the Imperial College London MRC Centre for Global Infectious Disease Analysis published Report 4: Severity of 2019-novel coronavirus that estimates the CFR based on China’s statistics at 18%, or 0.8-0.9% when accounting for underreported mild cases. Both figures approximately match my estimates (respectively 15% and 1.6%.)

On 14 February 2020, Real-Time Estimation of the Risk of Death from Novel Coronavirus (COVID-19) Infection: Inference Using Exported Cases estimated the IFR at 0.5-0.8%. The Infection Fatality Ratio is the same as a CFR estimate that corrects for underreported cases. It approximately matches my estimate (1.6%.)

As of 21 February 2020, a researcher from the Institute of Social and Preventive Medicine, University of Bern estimated the CFR using a methodology to correct for possible underreporting of mild cases, and found 1.6%. It exactly matches my estimate for this scenario (1.6%.)

As of 30 March 2020, a peer-reviewed paper in The Lancet, Estimates of the severity of coronavirus disease 2019: a model-based analysis, estimated the IFR at 0.66%. It approximately matches my estimate (1.6%) within a two-fold factor.