...Avalon! They delivered the first Bitcoin ASIC mining device today. And to no less than core Bitcoin developer Jeff Garzik, see his blog: box opening, internals, mining live. Avalon contracted TSMC to make the chips at a 110nm process. The device mines at 66 Ghash/s and draws about 440 Watt, currently generating about $210/day (11 bitcoins/day). 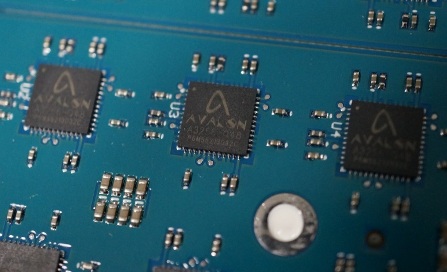 Avalon is a very small scale project run by 2 chinese guys, ngzhang and BitSyncom on the bitcointalk.org forums. In the past year, they have successfully designed and sold FPGA mining units. But their next step to increase power efficiency —developing a custom chip, or ASIC— required a much larger budget. So months ago they went to the whiteboard and announced to the community: "we can make a batch of 300 units with these performance and power characteristics, at this price point, do you want to pre-order in order to fund us?" And they pre-sold all 300 units at a price of $1300 each, which was sufficient to cover the NRE costs of developing at 110nm ($200-300k). After months of developement, BitSyncom personally shipped the first units rolling out of the assembly line to Jeff Garzik and to the Bitcoin Foundation, to establish further credibility for their project. A second batch of 500 Avalon units will open tomorrow, at $1500 each.

The story would not be complete if I did not mention the insane ASIC race that was, and still is, going on right now between different efforts, private or commercial, to ship chips in quantity. In addition to Avalon, we have:

A few other ASIC projects mentionned their intentions but never concretized: Reclaimer (seemingly abandonned his plans), LargeCoin (no more updates since a while).

With the first ASICs now in the wild, and the Bitcoin exchange rate shooting up (+80% over the last 3 months), it sure is an interesting time in the Bitcoin world...