A semi-popular Twitter thread by @boriquagato argues that stay-at-home orders are ineffective at reducing mortality in the US: “there is just no evidence that this incredibly expensive and harmful policy has any effect at all.”

This is, of course, preposterous. @boriquagato attempted to rank US states by cumulative deaths per capita, and observed how the ranking changed over ~4 weeks. I will explain the flaws in their application of this methodology. But beforehand, I will present a superior methodology: examining the trend of daily deaths per capita.

When analyzing daily deaths, be aware there is always a lag between the moment a stay-at-home order goes into effect and the moment a reduction of daily deaths is observed, for many reasons:

The lag is approximately 2-4 weeks. So I charted daily deaths per million inhabitants for each US state, marked the date of stay-at-home orders with a dashed line, and overlaid a shaded area 2-4 weeks later: 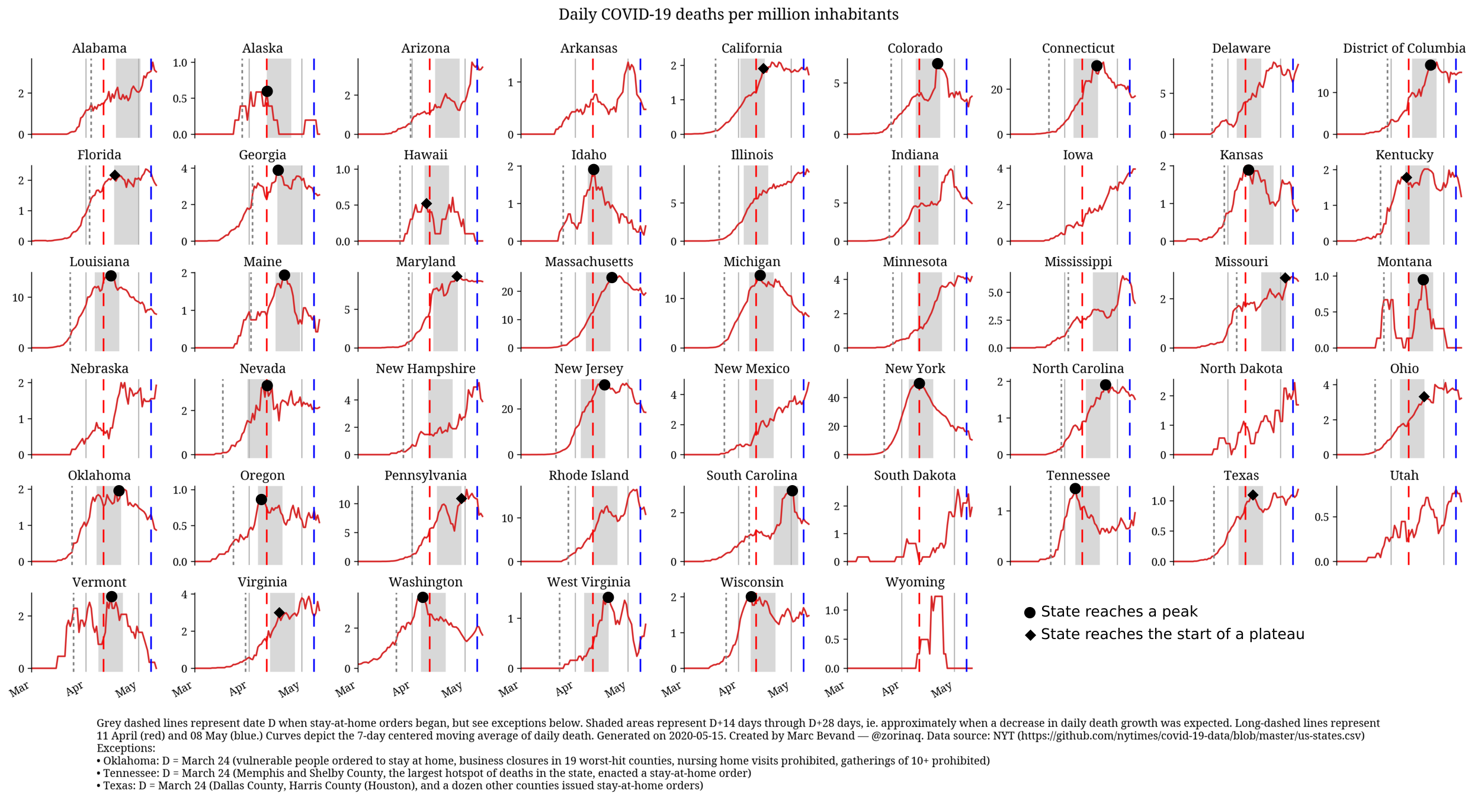 In 3 states that implemented stay-at-home orders, we see the curve is neither peaking nor reaching a plateau around the expected time. However the sources of these anomalies are easily identified, and once corrected the curve does peak or reach a plateau when expected:

In 4 states that implemented stay-at-home orders, we see anomalies with no obvious explanation:

In 3 states that implemented stay-at-home orders, daily deaths continue to increase past the shaded area. However these states are the top 3 states in the nation with the highest shares of long-term care facility deaths according to Kaiser Family Foundation (Minnesota: 81%, Rhode Island: 77%, New Hampshire: 77%) well above the nationwide average of one-third. So daily death growth in these states does not reflect a failure of the stay-at-home policy, but a failure of keeping their long-term care facilities safe:

In 7 states that never issued stay-at-home orders, deaths generally follow an upward trend, with no signs of stopping. However these states are so small and have so few deaths that their curves are very noisy (except the largest state, Iowa):

We can produce the same charts with cases instead of deaths. I expect the lag between stay-at-home orders and daily cases peaking or reaching a plateau to be 2-15 days, represented by the shaded area: 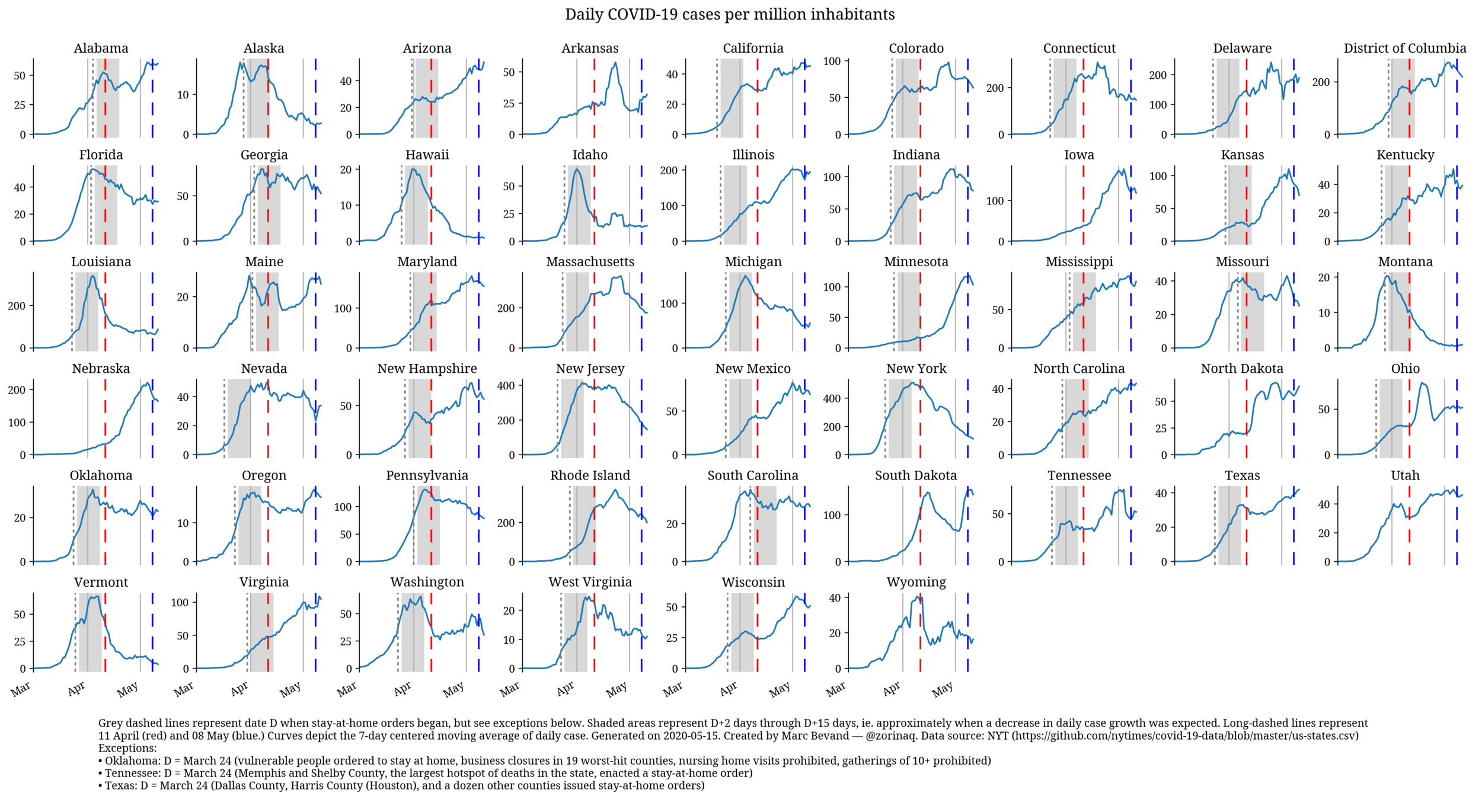 For many states, we do indeed observe daily cases peaking or reaching a plateau 2-15 days after the stay-at-home order.

However daily cases sometimes continue to increase beyond the shaded area. A likely explanation is that states are increasing the daily test rate over time, which improves the case ascertainment rate. For this reason, charts of daily deaths in the previous section are a more reliale indicator of the effectiveness of stay-at-home orders.

@boriquagato ranks US states by cumulative deaths per capita and observes how the ranking changes over approximately 4 weeks, between 11 April and 08 May. Blue represents states that implemented stay-at-home orders, and red those that did not: 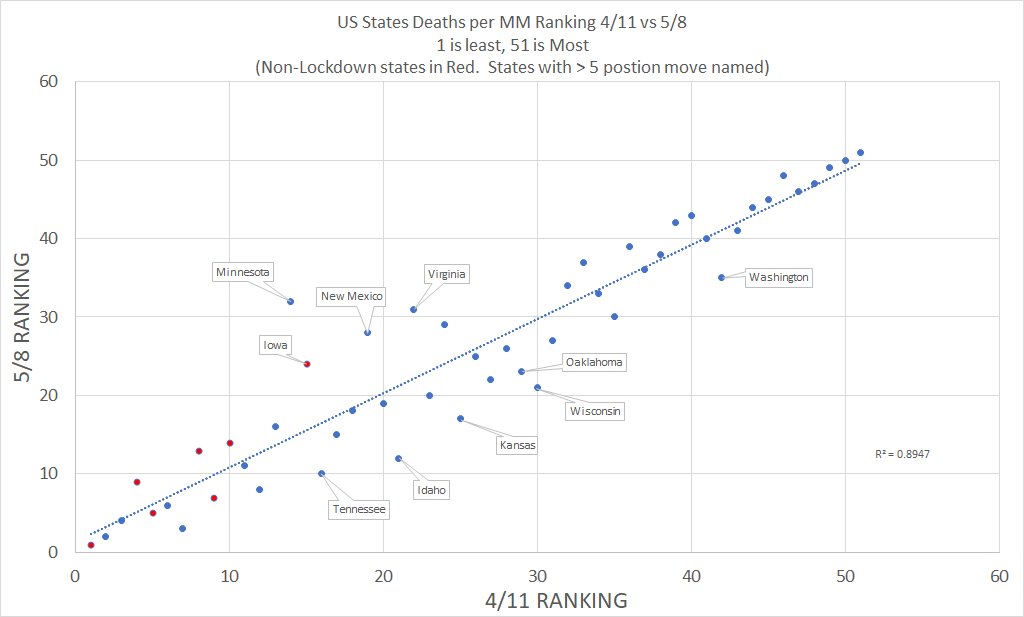 Firstly, the scatterplot is bogus. I recreated it using census.gov 2019 population data and the New York Times COVID-19 data repository and I ended up with a significantly different scatterplot. Also, trying to place a line of best fit on this scatterplot is pointless as it simply approximates y=x when the time span is as short as 4 weeks. Among the states without stay-at-home orders, according to @boriquagato’s version 4 of the 7 states saw their rank worsen, but in reality it happened to 6 of the 7 states. This is evidence stay-at-home orders are effective at reducing mortality: 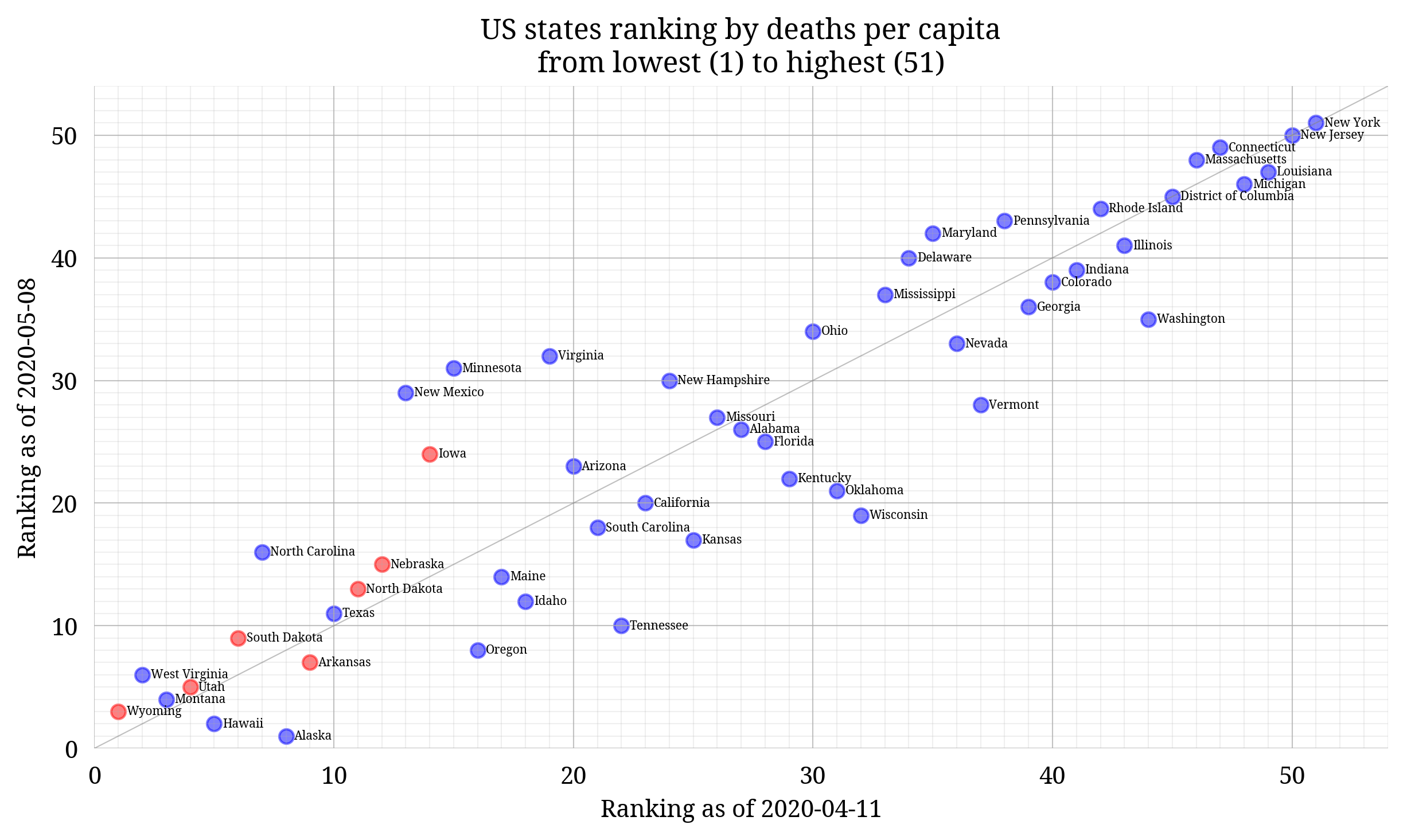 Secondly, @boriquagato selected a premature time period that failed to fully capture the effectiveness of stay-at-home orders. For example look at the District of Columbia:

The stay-at-home order was clearly effective because daily death growth peaked then started declining. However the time period 11 April (red dashes) through 08 May (blue dashes) is too early to capture the decrease in full; it should have been shifted by minimum ~9 days. So I recreated @boriquagato’s scatterplot over [Update 2020-05-28: I updated the chart to cover 20 April–28 May as the difference is even more striking on a longer time period]: 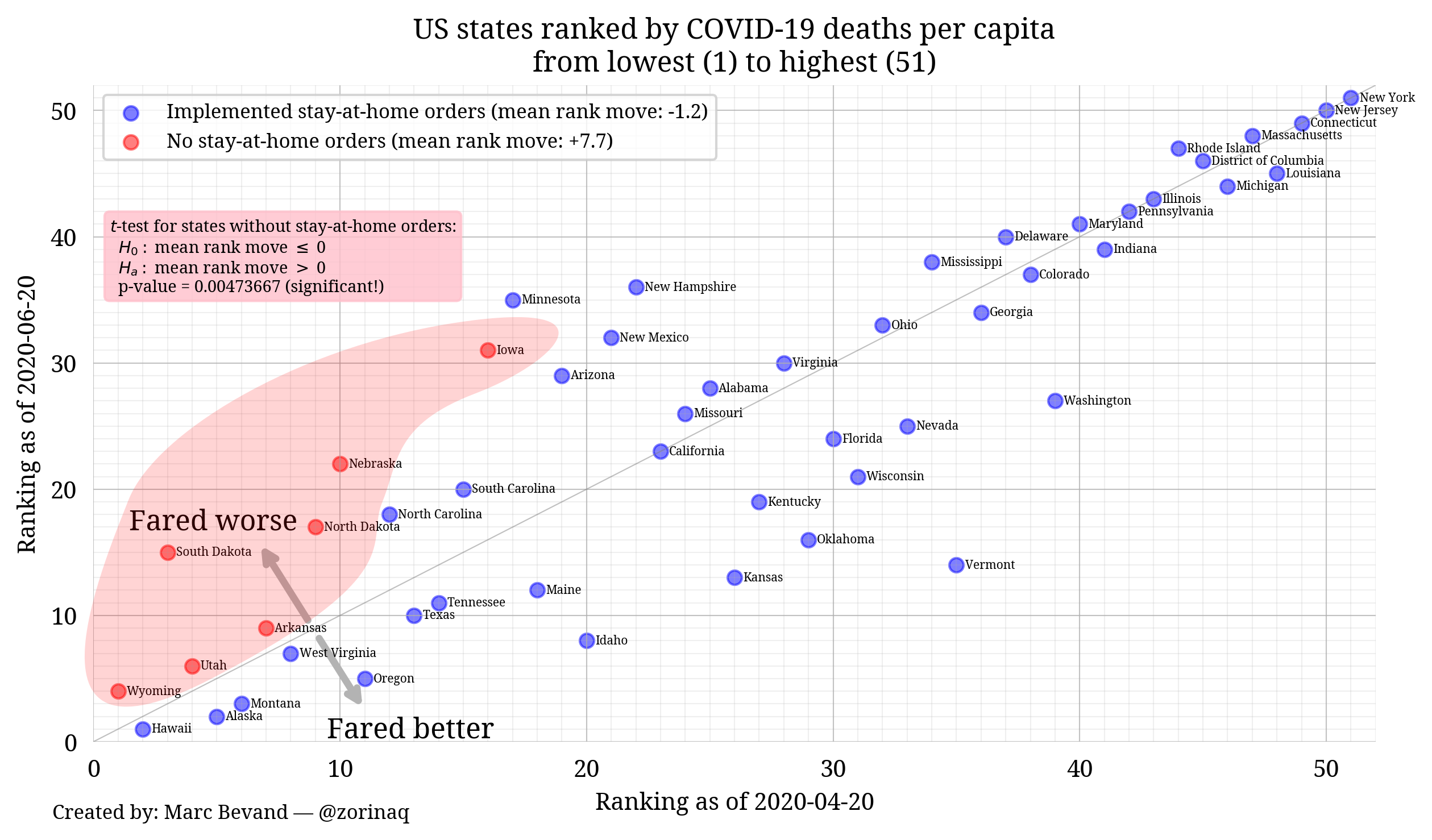 On average stay-at-home states gained 1.0 ranks, while states without the policy lost 6.3 ranks. In fact, every red states moved up above the diagonal. Can we evaluate the statistical significance of this? I assumed the null hypothesis that these states did not fare worse, and computed a p-value of 0.010! This is statistically significant evidence that the stay-at-home policy is strongly correlated with a reduction in deaths.

But a scatterplot of states ranked by cumulative deaths per capita is a crude tool to validate the effectiveness of stay-at-home orders. There is a 100-fold difference between the hardest-hit state, New York at 1400 deaths per million, and the least-affected, Alaska at 11 deaths per million. So a state where the stay-at-home order is significantly effective may improve its rank by merely 2-3 positions over a few weeks. For example Michigan crushed the daily death curve, but only moved from rank #46 to #45; look at this chart that is a different representation of the same data as the scatterplot above: 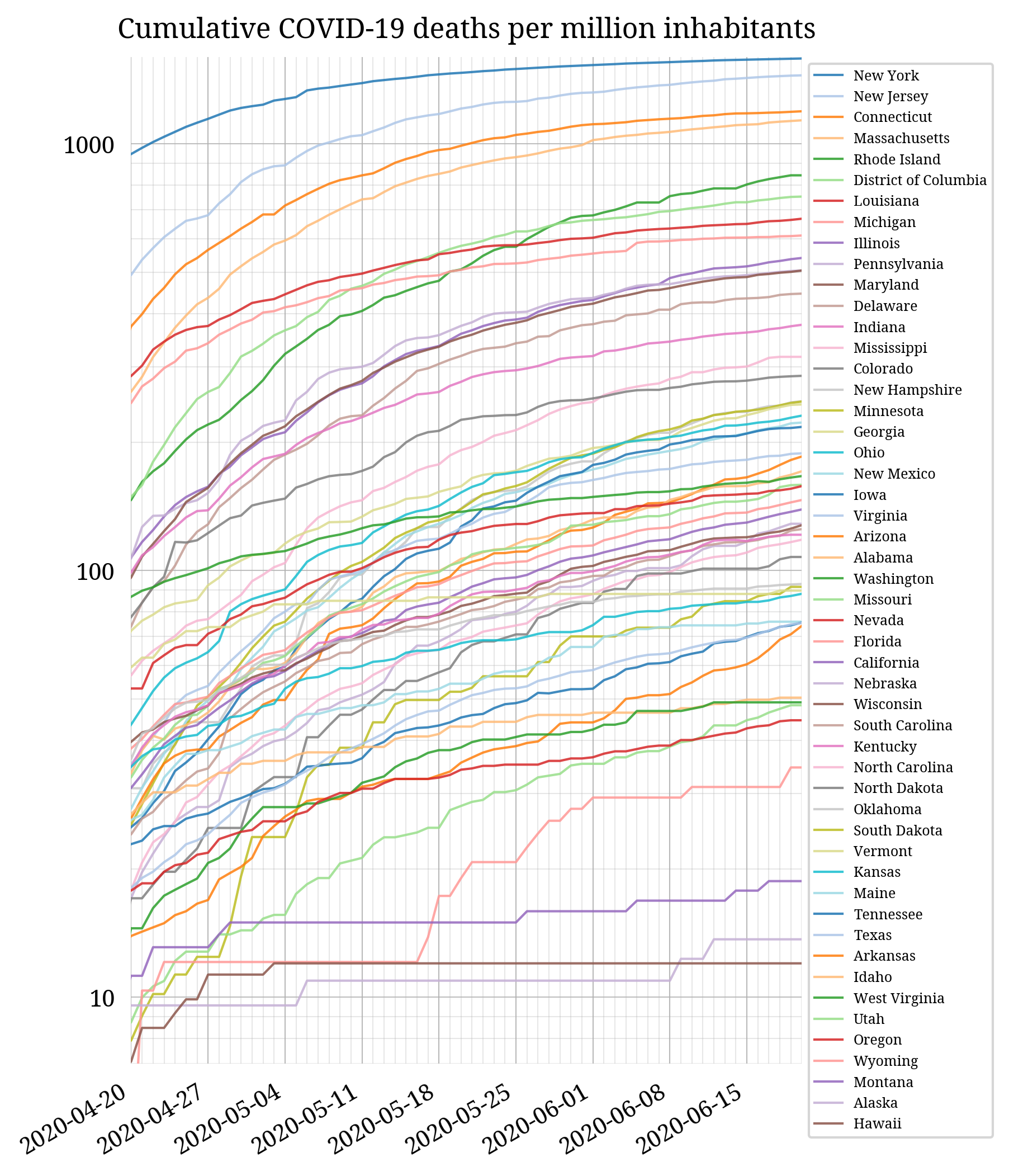 The scatterplot created by @boriquagato is incorrect, probably because of errors in their (undocumented) data sources or data input. A corrected scatterplot shows that states not implementing such orders fared noticeably worse than states that did. This is evidence that stay-at-home orders are effective.

Nonetheless, a scatterplot of states ranked by cumulative deaths per capita remains an inferior tool to validate the effectiveness of stay-at-home orders, because of the huge 100-fold difference in death rates, even before states started implementing stay-at-home orders.

This analysis could be improved if states reported deaths by date of death, like Indiana and Mississippi. Most states do not provide such data, which creates anomalies in daily death curves, as states sometimes report unreported deaths from weeks prior.

Another improvement would be possible if states provided separate statistics for deaths in long-term care facilities. Deaths in such facilities account for a significant number of total deaths, and are largely uncorrelated with whether or not a state implemented a stay-at-home order.

Finally, the findings in this post are largely supported by third-party research, eg.:

@boriquagato made false counterclaims, did not understand my data, largely ignored my replies, and abruptly withdrew from the discussion by blocking me on Twitter: